Core Consultants are proud supporters of the International Chromium Development Association. If you’re looking for expert views on trade wars, an open debate with Chinese ferrochromium industry experts, global chromium industry and its markets outlook, incredible networking opportunities and evening functions, the Chromium 2018 is the conference to attend.

September saw prices bottom-out across the board as buying activity became low around the Chinese mid-Autumn festival. While chrome ore prices have since recovered slightly, the recovery is expected to be limited owing to a large quantity of cheap chrome ore arriving in Chinese ports later this month.

As it stands, prices are now at their lowest levels year-to-date in both the international and domestic Chinese markets, although ferroalloy production remains healthy and stable. The price of imported ferrochrome remains tied to the Chinese domestic price since the turnover of existing material has been somewhat disappointing.

A revision to the estimate of chrome ore stocks at ports caused a small increase to purchases made as producers began to fear that material was in shorter supply than first thought, but the impact on the market was negligible. Chrome ore stocks at major ports in China have indeed dropped below three million tonnes; however, the quiet season for stainless steel is upon us and we expect relative stability over the next two months.

South Africa’s new mining charter has committed to 30% black ownership of permit-holding mining companies, as well as enforcing further empowerment-focused rules across areas including employment equity and housing standards. While Zimbabwe’s mining sector is reeling from accusations of state corruption that resulted in a temporary local chrome mining ban, the nation’s policies are shaping up to be far more investor-friendly than those of its neighbour.

Major Chinese steel mills raised ferrochrome offer prices by RMB300 ($46.8/tonne) for October – a minor increase and a reflection of the tentative state of the market coming into the winter months. Looking ahead at the forecast… 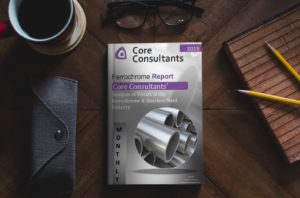