Since September 2016, chrome ore prices have had a good run. This came on the back of Turkey chrome ore producers halting production and refusing to supply China and bankruptcies in South Africa, resulting in limited output. The net effect was that chrome prices nearly doubled and have remained elevated. For example, in South Africa in September, 42% concentrate material was trading at $201-205/tonne, bulk and was increased to $410-420/tonne in December. Turkish 46-48% ore concentrates went from $265-275/tonne to $566-590/tonne over this time. The upshot of higher chrome ore prices was two fold, namely, an upward revision of the ferrochrome benchmark price to 165c/lb in 1Q17 from 110c/lb in 4Q16 and higher stainless steel surcharges.

February is always an interesting time. The Chinese New Year (CNY), generally brings a slowdown in demand and lower prices. At the same time, market participants are looking for signals in the market to gauge direction ahead of the the March benchmark negotiations. Second quarter negotiations are vital as this quarter is traditionally the strongest quarter, with European stainless steel mills looking to restock, South African producers running the smelters ahead of Eskom winter tariffs in the third quarter and Chinese restocking activity following the New Year.

Notwithstanding the above, the current market is hard to read. We believe that on the chrome ore side, the bias is to the downside. Chinese chrome ore stocks at ports stand at 1.793m tonnes, up 29,600 tonnes from the previous month. Similarly, a look at the Wuxi and Foshan inventory levels indicate that stocks have risen. Furthermore, if we ignore February as an outlier due to the CNY, and instead look at China’s January’s ferrochrome production rates, we note that capacity utilisation is declining. All these factors point to probable weakness in chrome ore demand and we should see prices coming down in the second quarter.

A consideration of Europe’s stainless steel industry; surcharges have reached a two year high, which is normally a buy signal. However, if we consider order books and lead times, Eurostat describes this “fair.” This is again indicative of a lack of confidence in the sustainability of chrome prices as it is these prices, not nickel, that has driven surcharges higher.

What makes the direction hard to read is the latest ferrochrome spot market transactions which are occurring below benchmark. 65-68% HC-FeCr was at 120-125c/lb, ddp, Europe. 48-50% charge chrome was trading at 150-155c/lb, in warehouse. In China, prices are at 109-110c/lb for South African material, 50% basis, yet in general South African producers are still holding firm on chrome ore and ferrochrome offer prices.

In our view , unless we see chrome ore inventories in China dipping below 1.5m tonnes by mid-March, we expect that there will be a rollover to the ferrochrome benchmark in 2Q17 and chrome prices will start declining by around 10-15% next month which will cause a downward revision of prices across the supply chain.

Enquire about our chrome ore report 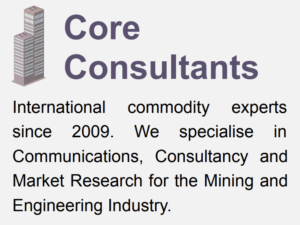